The Story Of Earth And Life

The Story Of Earth And Life

Southern Africa is without equal in terms of geology, a treasure trove of valuable minerals with a geological history dating back some 3 600 million years. In addition, the evolution of plants and animals, especially mammals and dinosaurs, is well preserved in the region, which also has among the best records of the origin of modern man.

The story of earth and life provides an insight into this remarkable history – how southern Africa’s mineral deposits were formed, how its life evolved and how its landscape was shaped. Along the way readers will be enthralled by accounts of the Big Bang that marked the beginning of time and matter, by drifting and colliding continents, folding and fracturing rocks, meteors colliding with the Earth, volcanic eruptions, and the start of life. Other topics include why South Africa is so rich in minerals, how glacial deposits came to be found in the Karoo, why dinosaurs became extinct, how mammals developed from reptiles, and how closely humans are related to the apes.

The answers to many such questions can be found in this title. Anyone interested in the landscape and ecosystems in which we live will be intrigued by this title. 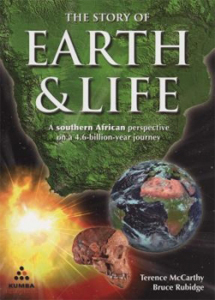