On the black markets of Southeast Asia, rhino horn is worth more than gold, cocaine and heroin. This is the chilling story of a two-year-long investigation into a dangerous criminal underworld and the merciless syndicates that will stop at nothing to obtain their prize. It is a
tale of greed, folly and corruption, and of an increasingly desperate battle to save the rhino — which has survived for more than fi fty million years — from extinction.

Killing for Profit is a compelling, meticulous and revelatory account of one of the world’s most secretive trades. It exposes the poachers, gangsters, con men, mercenaries, killers, gunrunners, diplomats, government officials and crime bosses behind the slaughter. And it follows the bloody trail from the front lines of the rhino wars in South Africa, Zimbabwe and Mozambique to the medicine markets of Vietnam and the lair of a wildlife-traffi cking kingpin on the banks of the Mekong River in Laos …

Be the first to review “Killing For Profit” Cancel reply 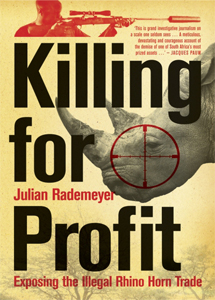 You're viewing: Killing For Profit R250.00
Add to cart