Elephants have long been targeted by humans: not only are they killed for their ivory, but their extraordinary strength, intelligence and charisma have seen some of them captured, chained and effectively jailed for life.
Bully and Induna are two African elephants, both orphaned in organised culling operations and destined for lives in captivity. Growing up far apart and quite differently, Bully (a former animal film star) and the less fortunate Induna were both driven to react to their circumstances – Induna even killed one of his carers. Their individual situations reached a point where both were considered to be dangerous animals and were under threat of being put down.
This is the true story of their lives. Conservationist Richard Peirce presents their individual narratives and the twists and turns of their fortunes: the exploitation of these majestic but sensitive animals, how they each came to be trapped in unsuitable ‘employment’ and shunted about from one venue to the next, before finding one another – free at last – on a farm in southern Africa.
Giant Steps is a gripping story, full of drama, danger, sadness and ultimate rescue.

Be the first to review “Giant Steps” Cancel reply 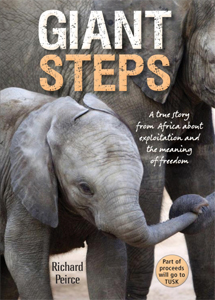