Cuddle Me, Kill Me

Cuddle Me, Kill Me

Canned lion hunting sprang to the world’s attention with the 2015 launch of the documentary, Blood Lions. This movie blew the cover off a brutal industry that has burgeoned in the last decade or so, operating largely under the radar of public concern.

In Cuddle Me Kill Me, veteran wildlife campaigner Richard Peirce reveals horrifying facts about the industry. He tells

Well researched by Peirce with the help of an undercover agent, and illustrated with photos taken along the way, this is a disturbing and passionate plea to end commercial captive lion breeding and the repurposing of wildlife to cater for human greed.

Be the first to review “Cuddle Me, Kill Me” Cancel reply 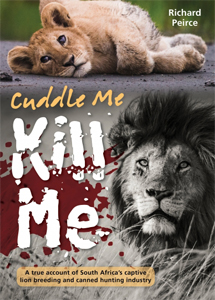